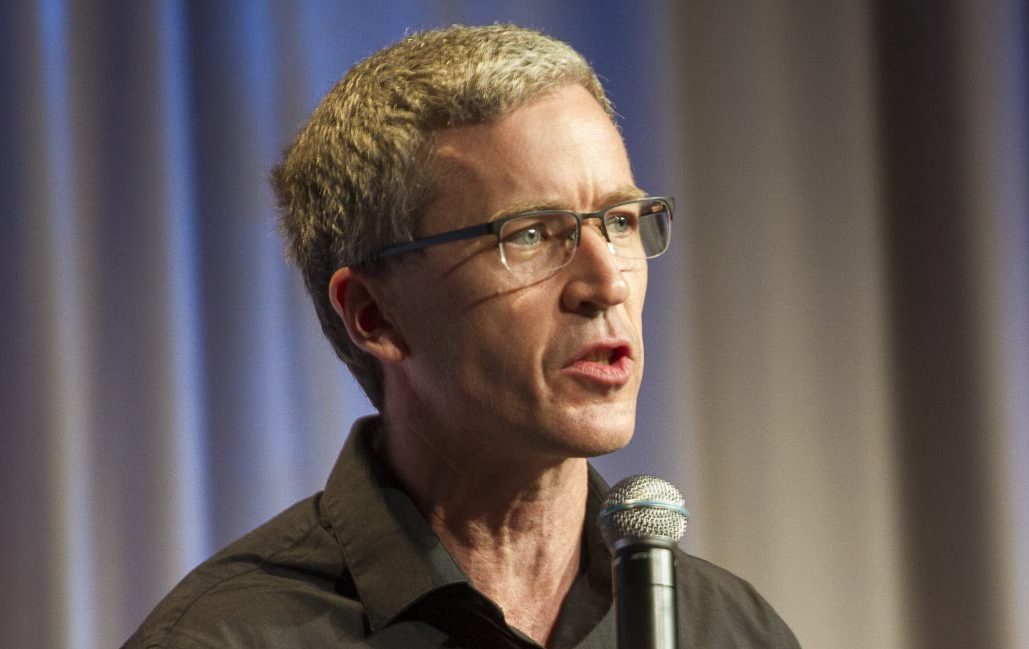 My first comic epiphany was when I wrote a Humour Page with a friend in college. It was the first time that I’d written comedy and done anything for an audience. The combination of doing it and having people actually read and enjoy it was enlightening and motivating. I had a second comic epiphany about fifteen years ago, when I stopped being self-conscious in front of people. I think we’re all afraid of showing our true thoughts and our true selves, for fear that we will be ridiculed, so we present a more measured and controlled version of ourselves. But at a certain age, I realized that I’m more interested in being myself than I am in what people think of me, which gave me the confidence I needed to put myself out there more. I started writing and eventually performing in public, knowing that some people might not like it … and that was just fine.

My name is Chet Haase and I am a software engineer at Google on the Android team, where I have worked since 2010. Until recently, I was leading the team that develops the UI Toolkit (UI, animations, graphics, text – sort of the plumbing layer for the visual pieces that applications use). I just changed roles to become a developer advocate for Android, which means I get to talk to Android developers about how to write great applications.

I moved down to California after grad school in Oregon, because this is a good place to look when you want a job in tech. When we got here, my wife and I decided that it was too crowded and expensive, but that we’d give it five years and then move somewhere else. We’re still here, 26 years later. It’s only gotten more crowded and expensive, but this is where the interesting work is, and you eventually get used to the rest of it. 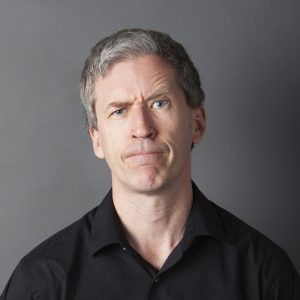 Outside of my job, I enjoy comedy in all of its forms. Writing, performing, watching, analyzing – I like laughing and making people laugh and understanding why things are funny (and why they are sometimes not funny). I appreciate a spectrum of very different stand-up comics, from Jerry Seinfeld (with his carefully crafted and casually told observational stories) to pure one-liner joke comics like Mitch Hedberg and Steven Wright. But for my main comedy influence, I’m going to have to go with Monty Python. I first saw them on TV when I was about ten, and never recovered; the combination of deadpan and the absurd in their sketches is, to me, pure joy.

Saying stupid things with a straight face has always been my favourite form of comedy. It harkens back to my Monty Python fascination as a kid. Originally, this only came out in casual conversation with friends and colleagues (note: there are some people who will never get my humour; they need some visual cue that I’m joking. Which I refuse on principle … and because it’s funnier to keep them confused).

In the last few years, I’ve incorporated this style into my comedy routines, especially satire talks that I give. These comedy talks are presented as “keynotes” in technical conferences. I play the character of what I call the “arrogant idiot,” where the jokes come from the inherent disconnect between the ludicrous things I say and the complete confidence with which I say them.

I’ve also become much more comfortable with improvisation, where I’ll have an extended Q&A with the audience in which I answer their questions in character. The first time this happened, it was because I had to fill time. I had a 15-minute slot and 30 slides for my talk, figuring that would easily be enough to fill the time. As I finished the final slide, I looked at the time and found that four minutes had elapsed; there were still eleven minutes left. So I said, “Does anyone have any questions for me?” But it was clear after that first attempt that the Q&A is actually the best part of the show. 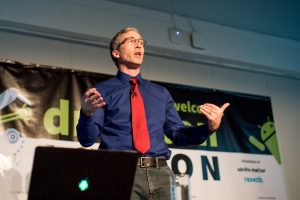 My time with San Francisco Comedy College (SFCC) was helpful in a couple of ways. First, it helped bridge the confidence gap between knowing that I wanted to try stand up and actually getting up on stage to do it. There’s really only one way to get better at stand up, and that’s by doing stand up. But that first step onto the stage is a doozy. Going through a class and doing my first stage time with a smaller, more forgiving group helped me start. The class also gave me techniques to write and deliver material that made my experiences so much better than they would have been otherwise. I also took improv classes at SFCC, which introduced me to some comedian friends, including the people who founded the Speechless comedy show.

Sammy Wegent, the co-founder and CEO of Speechless, taught an improv class at SFCC with Marc Hershon. I took that class and a couple of the follow-on classes, and I got to know Sammy and Marc from that experience. A couple of years later, they invited me to their first Speechless show, which is an improv presentation comedy show. They thought I’d enjoy it as someone that lives in that netherworld between comedy and corporate presentations – I loved it. When I talked to them after the show, they invited me to be in the next show, and I’ve been coming back ever since.

Speechless ran a tournament with participants from various Silicon Valley tech firms. I won it that first year, so I walked home with the trophy, which they had engraved with the slogan of ‘The Funniest Person in Silicon Valley’. Why they had the right to come up with that title and how I possibly qualified for it by winning a single tournament for a specific improv comedy show is a mystery, but I do have the trophy, and it does say that thing. 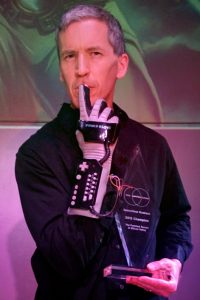 There is no buzz greater than that you get from a live audience laughing at a joke you just made. But performing takes time out of a busy life, so I also enjoy simply sitting down and writing comedy, or thinking of a funny line and putting it out on Twitter. All of it is fun to me, analyzing what works and trying to tune things to work better.

Comedy, especially performing comedy, is fascinating because you really learn how to do it by actually doing it. My advice to anyone looking to take up comedy is to simply try it (I wish I’d tried it earlier). You can always jump off the deep end and put yourself up at an open mic for stand up. But you don’t have to go that far to get into comedy performance. Take an improv class. Give a talk. Do toastmasters. Do anything that puts you up in front of people, and try to amuse the audience. See how it works. And see how you feel when you can make them laugh. And if it’s fun, do more of it and it’ll get better and more enjoyable. If it’s not fun, that’s fine too; it’s probably not for everyone. But the experience you get in trying it out can help in other ways, like giving talks, or presenting in meetings, or learning to accept rejection and utter failure. Always remember that the audience wants you to succeed. They are there to have fun, not to see you bomb. They are really on your side. I did a routine where I asked the audience to repeat some things after me … and they did! Now I always try to interact with the audience when I can, because they want to be part of the show, and involving them adds a level of unpredictability that makes it even more fun.

I definitely think that comedy has been a benefit to my tech career. The more comedy I’ve done, especially improv, the better I’ve gotten at tech talks. That is, the talks I give are highly technical (diagrams, code, the works!), but I always try to make these presentations entertaining. This doesn’t mean I script jokes into them, or try to make them a laugh riot, because that’s not what the audience is there for. But if something comes up and I can make a joke, or at least keep the conversation amusing, then the audience stays more engaged and willing to absorb the technical material. I’ve always said that you can’t educate an audience if they’re asleep. My background and interest in comedy help with making these talks more engaging, because it has made me more confident and comfortable on stage, making it much easier for me to think quickly and try things out that might be fun for the audience.

To me, software is a creative endeavour; we are inventing solutions to problems, not just typing in code. Finding creative outlets is not just healthy as a break, but it helps us keep an open mind and keep those creative muscles active.  And if it happens to help us do things better in our tech jobs, all the better. 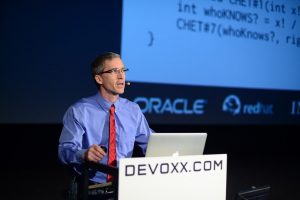 To see some of Chet’s comedy pages, as well as a link to his short humour books, be sure to check out the following links: 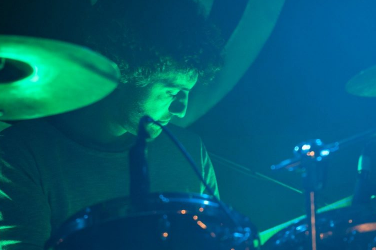 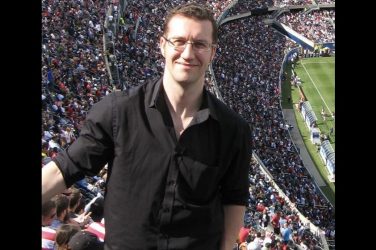 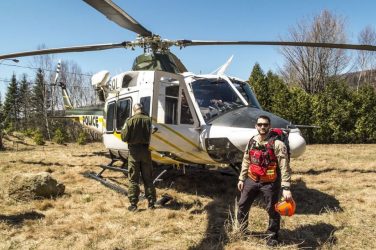 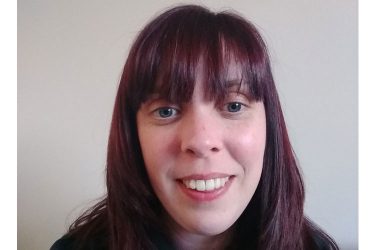