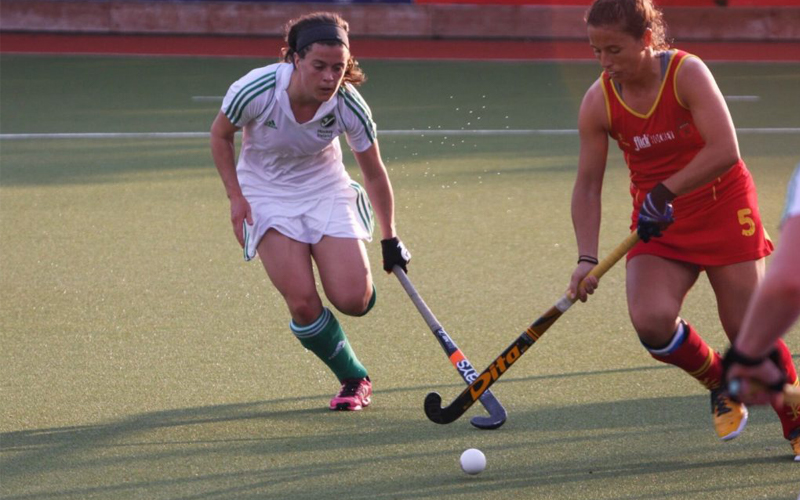 What I love the most about playing hockey is the speed and freedom of the game. I also love that it is a team sport – I have made some great friends from playing on a number of teams throughout the years. I naturally have a yearning for speed and tempo, so the quick nature of hockey means you have to be switched on at all times. Having the ability to play a free-flowing game and the feeling of hitting a perfect shot in the bottom corner and hearing the backboard makes me feel alive.

My Name is Aisling Naughton, I am 25 years old, and I am a Management Consultant with KPMG and an Irish International Hockey player. What drew me to Management Consultancy is the nature of the job – you get a huge amount of exposure from a very early stage in your professional career. I love the fact that we are going into organisations to implement a change or process. I am in the Digital Competency, which means the majority of the projects I am on are in relation to Digital Transformations or IT Remediations, which I find extremely interesting.

My main sport as a child was gymnastics – I trained and competed from the age of 4 until 13 at quite a high level. It was very intense as we trained 5 days a week. When I was around 9 years old, I also joined a hockey club, which trained 2 hours a week with a match on a Sunday. As I transitioned into Secondary School, I stopped the gymnastics and took up many different sports (Athletics, GAA, Cricket, Basketball, Tennis, etc.). Ultimately, hockey became my main sport. 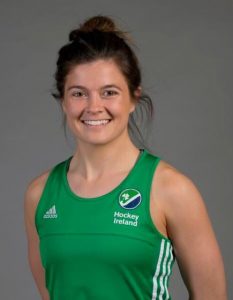 Growing up, my main sports inspiration was Nadia Comaneci. It then became Luciana Aymar, who is a retired Argentinian Hockey player. She won the World Hockey Player of the Year 8 times. When you watched her play, she had this incredible ability to appear as if she was running at a different speed to everyone else, who appeared to be in slow motion. Like Messi in football, she could control and manipulate the ball with such ease – her level of skill was just phenomenal and could create an opportunity from virtually nothing. It is hard not to be inspired by such a leader and presence on the pitch.

I play as a forward on a hockey team. Although there may be long periods of time during a game where you are running endlessly for not a huge amount of ball, I find it such an exciting position. When it comes up, there is nothing more exciting than a fast counter-attack and trying to create a goal-scoring opportunity. 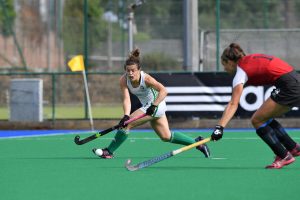 I have had a bit of a journey to join Ireland’s Senior Women Hockey Team. Since I was very young, I have always aspired to represent my country at senior international level. When I was 13, I was selected for the Leinster U16 team, which progressed to the Leinster and Irish U16, U18 and U21 teams until I was around 19/20. I then moved to Michigan for the year, where I studied and played hocket at the University of Michigan. When I returned home, I was recommended by a family friend to try my hand at rugby 7’s. The IRFU had just created an initiative where they were running a Talent Identification weekend in order to try to get female athletes from other sports to try rugby 7’s, as it had now become an Olympic Sport. This subsequently led me to play rugby 7’s one weekend and hockey the next weekend for the next few months (all while completing my 1st year in UCD).

I was then asked to commit to the rugby full-time in December, which subsequently led me to travel on the World Series Sevens Circuit, representing the Irish Women Rugby 7’s team in Hong Kong, China, Sao Paulo in Brazil, Atlanta in USA, and all around Europe. After that incredible year with the 7’s, I ultimately decided to return to hockey as I still had the desire to achieve my goal of representing the Irish Women’s Hockey Team at Senior level.

Therefore, after 2 years of strong club performances and training with the Irish Squad, I was selected to play a series of international hockey matches versus Spain in Belfast in June 2016. This was a month prior to leaving again to the states to do my Masters of Management at Duke University’s Business School. After returning from Duke, I regained my place on the Irish Squad and have been picked for a number of International series over the past 2 years. 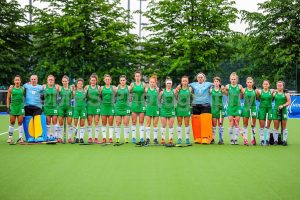 Hockey is a physically demanding sport – it requires a very high level of fitness. At international level, the speed of the game is incredible, so you have to be in peak physical condition. Throughout the year, we would go through “conditioning blocks”. These blocks involve running, cycling, rowing, etc. We also go to the gym a number of times per week. Injury prevention is also very important, so making sure you’re doing mobility every day is necessary.

With regards to the mental side of the game, there will always be an element of pressure when playing at international level. Therefore, it is important that each player knows how to deal with the situations most effectively, whether that is to speak to a sports psychologist or to come up with their own strategies to deal with the nerves. I think the mental side is probably one of the biggest challenges for a lot of athletes – you have to have the right frame of mind in order to be successful. 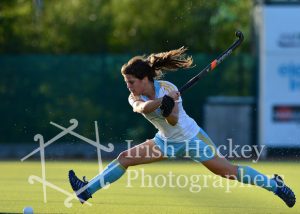 My favourite experience with the Women’s Hockey Team was travelling to Santiago, Chile in January 2019. It was a fantastic trip, where we played a number of matches versus Chile – it was my first proper long-distance trip that I had experienced with the team.

Achieving my long-term goal of representing my country for the first time will always be my proudest sporting moment. To stand on the pitch facing the Irish Flag and singing my national anthem was quite emotional. It was a culmination of years of training, hard work, and resilience. The nature of sport means that, as an athlete, you will suffer setbacks, such as both injuries and missed selections. But to get through those to finally achieve something I was working towards for years meant a great deal to me. It was also a special moment for my family, especially my mum who had sacrificed a huge amount over the years to bring me to and from training and matches all over the country (and, in fact, outside the country), as well as support me during every step of the way. 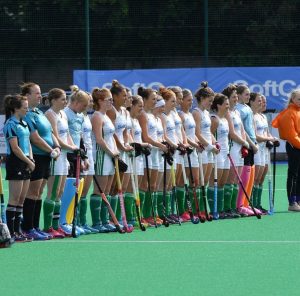 Regarding future goals, I have always wanted to play at an Olympic Games – that is what most athletes dream of and is the pinnacle of their career. I have recently come back from an injury which had me out of playing for a number of months – for now, I am focusing on getting back to full fitness and performance levels. Tokyo 2020 would be the dream, but playing at a World Cup or gaining 100 International Caps would also be incredible.

I have a bit of advice for anyone looking to play hockey for their country: 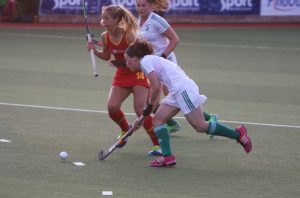 I think there are a number of transferable skills between hockey and Management Consulting. They are both team-based, goal-oriented, and require a lot of analysis. I like the quote “a setback is a setup for a comeback”. The nature of playing sport at a high level means that you will face setbacks at some point, whether this is a result of an injury or a missed selection, and it can be a very tough situation which you need to be able to handle. Therefore, having the ability to put the situation in perspective is so important. Similarly, over the duration of your career, there are bound to be tough moments which you have to deal with, but it is important that you learn from the experience and build upon it. Sport and work have so many similarities that skills from one domain can be of huge benefit when transferred to the other.

I think it’s great to share the sporting passions of technologists from all over the world, as it highlights what your colleagues are interested in outside the workplace. No matter what level you play at, sport has the ability to open up doors, create and build relationships, and be a common language for people all over the world. I love to find out what my colleagues are interested in outside of the workplace, as there certainly is more to life than tech. Equally, there is more to life than sport, but the balance of both is what makes life fun.

Sport is a major part of most people’s lives, so why not continue to grow the conversation within the technology industry, with the hope of inspiring more to get involved and take up a sport. It really does opens up so many doors, opportunities, and friendships before we even mention the health benefits! 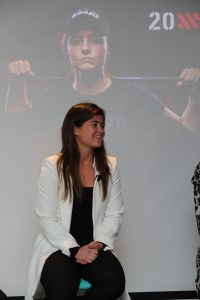 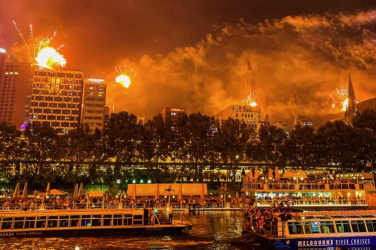 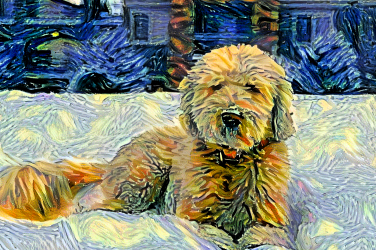