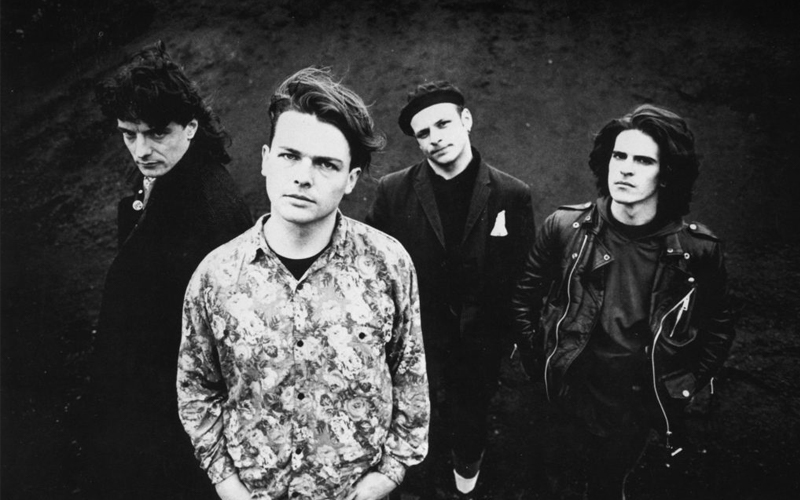 I didn’t play drums until I was about 22. The first time I sat behind a kit, I couldn’t believe what I had been missing. I could actually express myself – it was me that was coming out of every beat and every accent. It’s impossible to really explain that feeling. Suffice to say, I felt I had wasted my life up to that point. Once I found drumming, I threw myself completely into it. The shame of it all was that I didn’t find drumming till so much later in my life.

My name is Robert Hamilton and I am a ‘jack of all trades’. I qualified as a surveyor who then went on to become a musician. Along the way, I have earned a degree in law, worked in law, and qualified in the US as a Paralegal. Today, I am the founder and CEO of CnP Gen, a software development company (http://www.candpgeneration.com/). Ultimately, I consider myself a philosopher – I’m just waiting for a paid gig in that profession!

Currently, I live in Hamilton, New Jersey. Why? Because of the name, of course. 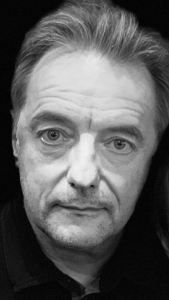 Outside of my job, I love music and spending time with my daughter. Drums are without a doubt my favourite instrument to play. I can’t play ‘properly’, but give me an excuse and I’ll sit behind that kit for hours.

I am more of a ‘song’ person than an ‘artist’ or ‘musician’ – I have great admiration for those musicians who have crafted great songs. Perhaps strangely for a drummer, it’s the lyrics that mostly attract me to a song. I really like a lot of Coldplay’s songs – ‘Fix You’, for example. A song with lyrics that really inspired me was Nanci Griffith’s ‘It’s a Hard Life Wherever You Go’. But there are also songs that I love, and not because of the lyrics – ‘Sultans of Swing’ by Dire Straits is an amazing track. For what it’s worth, the first song that I remember liking as a child growing up was ‘Don’t Let Me Be Misunderstood’ by The Animals. Coincidently, both the drums and lyrics are intriguing. 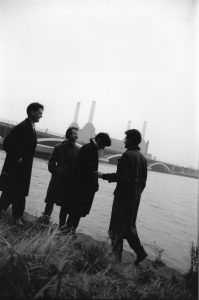 I was the drummer and a founding member of the rock band The Fat Lady Sings. Nick Kelly and I had played in a band together (Afraid of Pink) that fizzled out. We both strongly felt that being in Dublin was not really where we should be if we were going to be serious about forming a band. We simply decided that if we were going to form a band, we were going to move to London. Two other friends, David Sweeney and Finbar O’Riordan, felt the same. So, The Fat Lady Sings was formed by moving to London. We felt that if we could make it in London, we were proving our own worth. We wanted to test our own value, not just put a band together. Finbar and I drove his rusty old Mazda all the way to London; I remember we put my Bass Drum on the roof, with my clothes in it. It was really quite an adventure – I had never left Ireland before in my life! We funded the travel from the proceeds of playing a gig at the Mean Fiddler upon arrival. Once in London, however, both David and Finbar left the band; over time, Tim Bradshaw and Dermot Lynch came in to complete the line-up.

The inspiration of the band’s name, The Fat Lady Sings, came from a phrase in America – Nick came back to Dublin from a stint in New York with it. Apparently, there was a tradition for an opera singer to sing the US National Anthem towards the end of a baseball game. The team that was losing would often exhort and encourage themselves with the phrase – ‘It ain’t over till the fat lady sings’. I loved the sentiment of strength in the face of adversity, but most especially that such a positive and uplifting aspiration could lie in a phrase that, on its face, may be uncomfortable for some. I think one of the functions of artists is to highlight the beauty in the world that surrounds us. 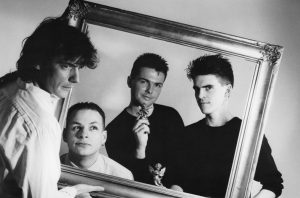 Our first single ‘Fear and Favour’ was a recording that Nick, Dave, Finbar, and I made in a studio down a back alleyway in Dublin. It was an extremely organic process. We didn’t have very much money, and I remember the engineer, Paul Thomas (who really was an amazing engineer), would constantly listen and mix the track using the tiny speaker on a Mac Classic computer. If it sounded good on that, he reasoned, it would sound good on anything. I wasn’t very good at tuning drums (I was still learning how to play, so ‘tuning’ was a concept beyond me at the time) and the kit was very old. In the end, I think that part of the track really sounds great, and it was all thanks to Paul. I am not sure that Nick had ever played a mouth organ before – but, again, the process was so organic that we gave it a try and loved the result. I could be wrong, but we may not have even used a click track. If I have any regret, it is that I didn’t get the opportunity to work with Paul Thomas ever again.

As for ‘releasing’ the track, that was a whole other story. A very dear friend of mine, Keiran McWilliams, played the track for Terri Hooley of Good Vibrations fame in Belfast. Terri agreed to release the single on his label. Nick and I literally picked up the singles from the dock and ‘spread them around’ wherever we could. I remember travelling back to Ireland with a suitcase full of them and being stopped at customs.

For the entire time that I was back in Dublin, I literally gave the single to as many shops, pirate radio stations, and night clubs as I could. The track never made the charts, but it became hugely popular in an ‘underground’ sort of way. We played the Baggot Inn on our next visit and couldn’t believe the crowd that turned up. When the opening guitar line for the track was played, the house literally came down, and the place went mad – still a highlight of my life to this day! Only a Dublin musician could appreciate the implications of such a reaction in the Baggot Inn – we were on our way!

Out of all the songs we composed, the stand-out tracks for me would be ‘Fear and Favour’, ‘Arclight’, and ‘Contact’. I have had too many great live performances with The Fat Lady Sings – one that comes to mind was the time when I had two beers before getting up on stage. I had never done that before, and I would never do that again. Coordination is something we all take for granted. But when you’re playing drums, it takes on a whole other significance. All I can say is that I was mortified and petrified, and I couldn’t wait for the show to end. I came to believe and realize that whenever that happens, you just do your best, smile your way through it, and don’t take yourself too seriously.

In 1993, after I had left The Fat Lady Sings, I set up and ran a project called Peace Together – it was an attempt to highlight the terrible pain and waste that the continuing situation brought to Northern Ireland, most especially upon the young people. Peace Together was the single most difficult thing I have ever done in my life; many people tried to talk me out of it. However, I had one thing going for me – my best friend Ali McMordie, who is the bass player for Stiff Little Fingers. Once I realized how much I wanted to do Peace Together, Ali was the first person I went to and was my starting point. After that, I had so many friends who supported me, including my girlfriend at the time, Sasha King. I was able to go from that simple starting point, to defeat after defeat after defeat, with enough successes in between to provide momentum. We persevered through to the end, thanks to surrounding myself with really, really great people. 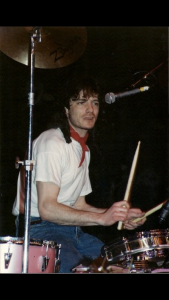 In 2005, I had ‘hung up’ my drumsticks, as they say. So, it was very hard to return to The Fat Lady Sings for our one-off reform show. I hadn’t played live in almost 15 years – so besides being terrified, the experience was very physically challenging. I knew I was essentially going to have the same experience the very first time I played live in the UCD bar. On stage, nothing sounds the same as in practice.

Following on from the ‘reformation’ experience, I decided that it was a waste to just turn my back on music. I came to music so late in my life that I lost the opportunity to learn or craft the skill of being a musician. Now, I have a kit permanently set up at home – once a day, I make a point of playing. I also picked up a guitar, and have gained an ever-increasing grasp of the instrument. Because I am ‘computer friendly’, I have been able to take advantage of the digital recording age. I now write my own songs and recently played on an album with my good friend David Sweeney, the original guitarist in TFLS. The album is titled ‘Days Awake’ by Sween and is available at all reputable establishments and sites.

I definitely think my experiences with music have been beneficial to my technological career. I have always been ‘computer’ friendly, and I think this comes from my time as a musician. As a musician, you always have an eye on where the latest trend is – this is an attitude that allowed me to embrace all the advances in technology.

My advice to any aspiring musicians looking to form a band is to make sure everyone is on the same page. You can’t go the distance unless this is true – if it’s not true, these will show up at all of the most testing of times.

My wife Kyle Hamilton (who is an amazingly gifted artist and Data Scientist – https://otia.io/2019/04/08/kyle-hamilton-machine-learning-lecturer-and-artist/) and I own our own consultancy firm with the name ‘C and P Generation’, which is a reference to the x, y and z generations, and tips its cap at the caution that we engineers need to approach our work with. Kyle and I approach our work with a determination not to allow the beauty of the digital age undermine the beauty of the organic world we live in. We don’t want to just think outside the box – we want to make sure the box is eco-friendly! 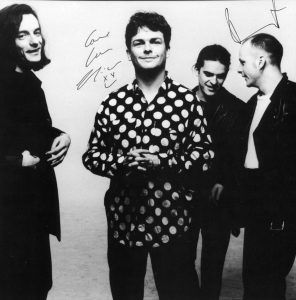 To see more on The Fat Lady Sings (including their biographies, discography, and downloads), be sure to check out their website: 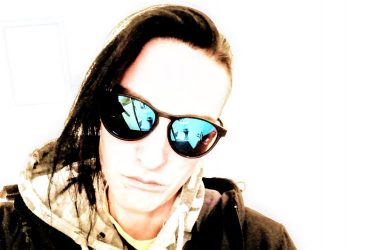 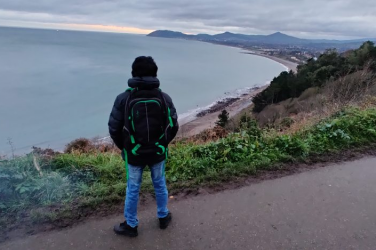 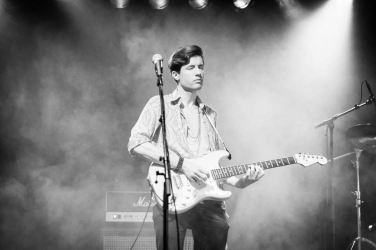 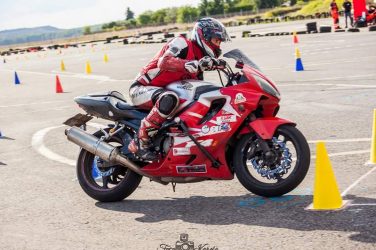