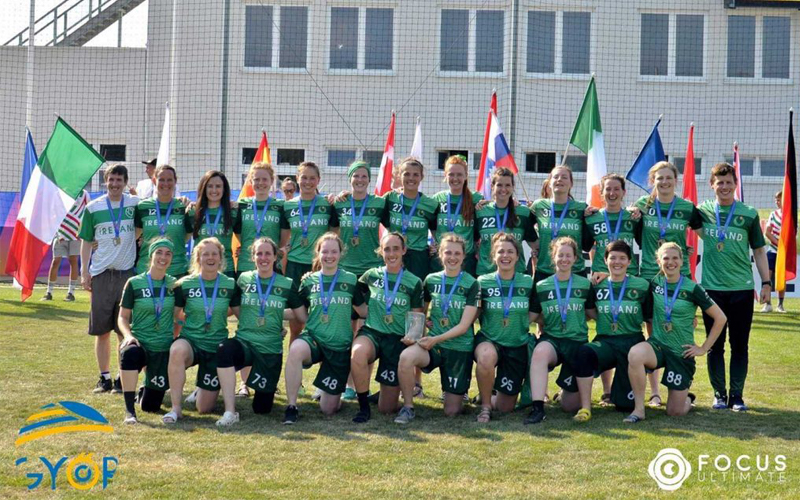 What I love the most about Ultimate Frisbee is the athleticism of the sport. I have always liked sports that involves competition in sprinting for space in a field. I also love the community, both in Ireland and abroad. The sport is still relatively small in Ireland, but most people who play are very dedicated to the game and are passionate about growing the sport. Because we play a lot of tournaments abroad, you really get to know each other through thick and thin and form really close friendships.

My name is Claire Pugh, I live in Dublin, and I’m a Software Performance Test Engineer. Initially, I chose to pursue IT as it seemed practical given the limited job market in Ireland during the recession. I love problem-solving, so programming appealed to me very quickly. In my current role, I really enjoy working out profiles to simulate real-use cases during performance testing and doing root cause analysis on any performance bottlenecks we find.

I first became interested in Ultimate Frisbee when I saw a match being played in my second year of University and just thought “that looks like fun, I’d like to try it!”. I played a lot of sports as a teenager: soccer, Gaelic football, basketball, and hockey, and I was ready to pursue a new team sport. 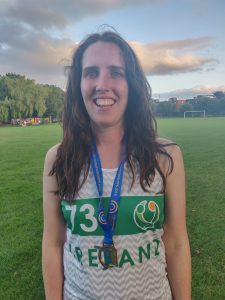 Ultimate Frisbee is a 7v7 team sport, played on a field 100m x 37m, with end zones of length 18m on either end. At International level, a game is 100 minutes long. At the beginning of the game and after each score, you start play with each team standing at the front of their defending end zone. The team starting on defence essentially serves the disc to the other team (this throw is called ‘the pull’). Once the disc is in the air, both teams can move and play begins.

You score by passing the disc up the pitch and by catching the disc in the end zone you are attacking. Your team loses possession if you don’t complete a pass (either by the other team intercepting the disc or if the disc hits the ground/goes out of bounds). You have to stop running once the disc is in your hand until you pass the disc to someone else. Ultimate is also self-refereed, which sounds crazy, but actually works pretty well.

I play mostly as an initiation cutter, which means I have to try to get free so the person that starts with the disc can throw me the disc when we start a possession.

I am a team member of the Ireland Women’s Ultimate Frisbee team. In preparation of the 2019 European Championships, there were trials in October 2018 – the coaches and a selection panel picked the team after putting us through a set of drills and match situations to test athleticism, skill, and pitch awareness. 21 team members were selected. My favourite thing about being part of this Ireland team is the collective drive, with everyone working hard together towards achieving a goal.

We did a lot of training for the European Championships. Over the winter of 2018, the majority of our training was gym-based strength and conditioning. From February 2019, we were expected to include two Ultimate sessions a week. We had a running conditioning plan that we had to do weekly, and most people would do additional throwing practice sessions each week. Altogether, we would have been doing 6-10 hours of training a week. One weekend a month, we had a National Team training session, which consisted of about 9-10 hours training spread across the Saturday and Sunday – we covered our team tactics and got a chance to play together as a squad. Finally, we played two warm-up tournaments as a squad as part of our preparation, one in Hamburg and one in Amsterdam.

We came into the tournament seeded 11th. In the power pool stage, we suffered close losses to favourites Germany and Russia, while getting good wins against France and Czech Republic. Following a pre-quarter win against Sweden, we came back to beat Finland in a rematch by 1 point. Beating Finland in sudden death in the quarter-final has been one of my favourite experiences playing Ultimate Frisbee (https://www.youtube.com/watch?v=EJGobra5HhQ). We moved on to beat Russia in the Semi-Finals. In the final, we beat Switzerland 15-8, which was the first time any Irish national team has won an international championship in Ultimate Frisbee.

2019 was my third European Championship. In 2011, I was a talented rookie. In 2015, I was co-captain and we had quite a young squad. This year, we came back with a more experienced, more confident, super hard-working squad – it was such an incredible experience to have so many years of hard work pay off and earn that gold medal.

In the future, I’d love for Ireland Women to be able to break into the top 4 at World Championships. World Championships are every 4 years, so the next one is in 2020 in The Netherlands. In the longer term, I would like to see Ireland qualify for the Olympics. Ultimate Frisbee was granted full International Olympic Committee Recognition in 2015, but it is likely to be at least 2028 before the sport will first be seen at the Olympics.

My advice to anyone interested in playing Ultimate Frisbee is to first start by finding a casual league and/or club team to play for. Irish Ultimate (https://irishultimate.com/) has information on leagues and club teams for beginners in different areas. My advice would be to have a look there to find the closest opportunity near you and contact them using the details provided.

I think Ultimate Frisbee is a team sport that centres around a philosophy of respect and good communication – this is definitely relevant to my work. As a performance tester, I have to work with lots of people across the project team to effectively do my job.

I absolutely think my experiences with Ultimate Frisbee have been a benefit to my technological career. The exercise and friendships are good for my mental health and happiness. Through Ultimate, I’ve coached and managed teams, and organised tournaments for hundreds of people. I’ve also become more proactive with thinking about goals I’m trying to achieve in work. Through all of these things, I’ve become more confident in myself and a more effective communicator.

There’s always more than tech. I think technology is exciting, and it’s great to be interested and invested in your job, but I always think it’s important to have something that you can be passionate about outside work too (I do get frustrated when tournaments have badly designed or slow websites though!).

Feature photo copyrighted by Quentin Dupré, FOCUS Ultimate. To watch Ireland’s final against Switzerland in the 2019 European Championships, you can subscribe and watch with Fanseat through the following link: 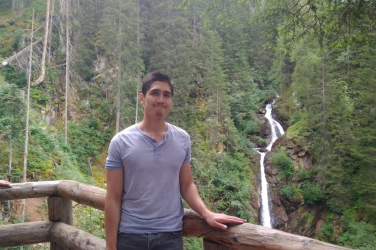