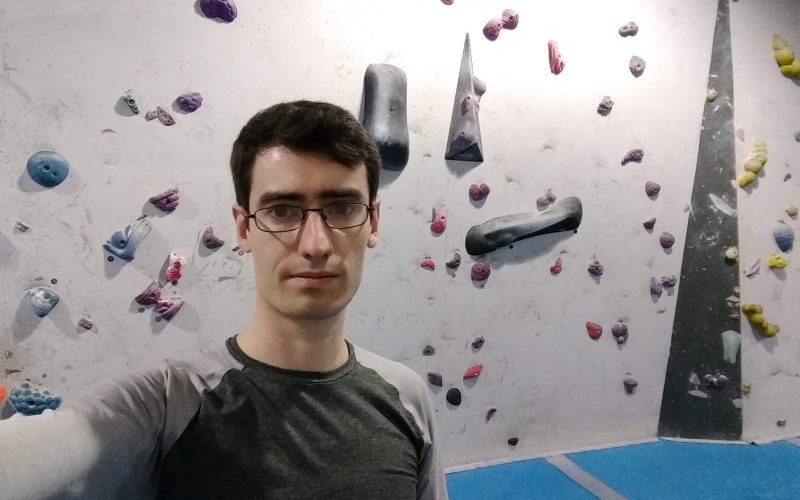 My name is Alex Mitchell and I’m working as a Software Engineer in Dublin City Centre. While I was still in school, I was aiming for a career in design or architecture. Later on, my interest shifted towards computer science because of the better job prospects in the IT sector.

My main hobby outside of the technology world is bouldering. Bouldering is a type of climbing that doesn’t involve ropes. A typical bouldering route would be about four metres high. This isn’t really high enough to require safety equipment like harnesses. The floor around the indoor climbing walls is made of a padded material to help break a fall.

I first heard of bouldering from a few colleagues who go climbing regularly. After joining in on the first climbing session, I knew it was something that I wanted to continue doing. As a kid, I liked climbing things like trees but I never realised how mainstream climbing was. Now, I go to Gravity Climbing Centre in Inchicore with a few colleagues every Wednesday. 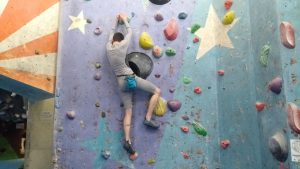 I had no idea what to expect the very first time I went climbing. The climbing routes are colour-coded by difficulty. My colleague told me to climb a particular colour, the easiest difficulty. I went up and down like it was a ladder. She then told me to try the next difficulty. Again, I went up and down with relative ease. Then I saw a much harder route, going up the inside of an archway with an overhang. I thought “that looks fun!” – I tried it and managed to make my way up the first few holds. My whole upper body quickly became tired. I struggled to move my arms and fingers after that. In hindsight, I probably should’ve stuck with the easier walls but at least it set a long term goal to be able to climb an overhang.

I don’t feel the need for any preparation for a particular climb. I’m not afraid of the heights reached when bouldering. Most people do warm-up exercises, like climbing easy routes and working their way up to harder ones each session. Stretching is also quite common. I wouldn’t be surprised if some climbers practiced yoga to help with flexibility. Personally, I dive in and go straight to climbing.

Each climbing route has a unique set of challenges. The overhanging walls usually have good, big holds but require a lot of core and arm strength to climb up. More straight up vertical walls (and walls with an inward incline, known as slabs) often have smaller holds that can only be gripped by the fingertips. Certain climbing routes are easier for people of a particular build and body type. I didn’t take part in sport or go to the gym before I started climbing so I hadn’t built up strength in any particular area. For that reason, I didn’t have a preference for a particular type of climbing. However, given that I’m six foot tall and weigh not much more than nine stone, this definitely gives me an advantage overall.

I’ve never been outdoor bouldering. There are several obstacles that make it less accessible than indoor bouldering. At least in Dublin, the climbing centers are accessible via public transport, whereas many sites for bouldering outdoors are remote and only accessible by car. Outdoor bouldering also requires owning the equipment. Since I started climbing regularly, I bought my own climbing shoes. I also need a crash pad for any potential falls. So my next goal is to try outdoor climbing. I want to go to Fontainebleau in France, which is a very well known spot for bouldering. The plan is to find accommodation nearby for a few days and go climbing. 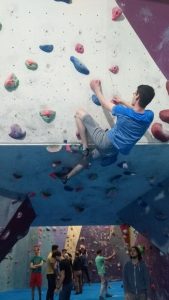 My favourite thing about indoor bouldering is how accessible it is. The only equipment required is climbing shoes, which are available to rent at any climbing center. Climbing centers have a range of difficulties suitable for all levels. My advice to anyone looking to take up bouldering is to just go for it. There’s no barrier to entry and there are climbing routes suitable for all levels of experience.

There seems to be quite a few software engineers that go climbing. I think there is a similarity in the problem-solving aspect. Both climbing and software engineering requires solving problems and, very often, people find a solution that’s unique to them while they are climbing. I don’t think that bouldering has a direct benefit on my career but rather on my personal life. Taking part in sport has helped my confidence because it gives me something else to identify as – more than just a software developer.

I never took part in any sports since leaving school. Even in school, there were only the usual sports like football which never suited me. In college, I never took the opportunity to explore other sports either. I think by sharing my story with Otia Magazine, it might encourage others to start climbing or do another sport for that matter. I think everyone in the industry has a passion for something not technology related — maybe it’s just waiting to be discovered. 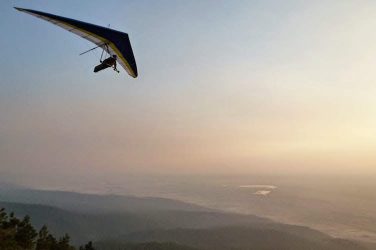