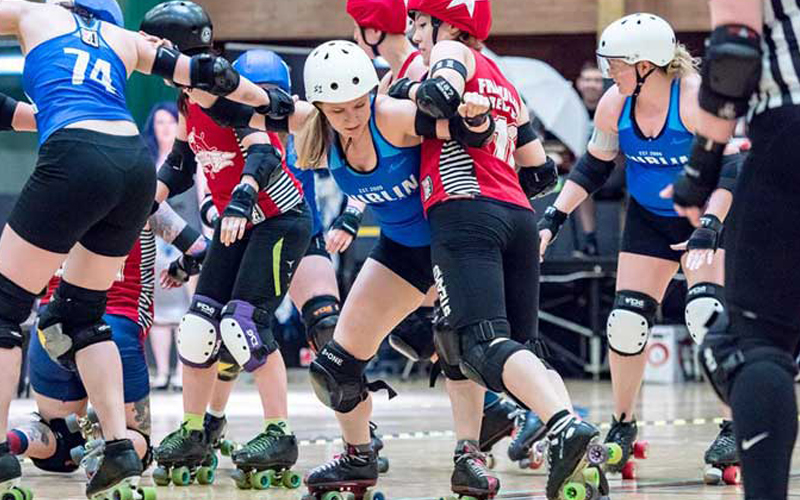 Hi, I’m Fiona Carton, although when playing roller derby, I’m more commonly known as Malibruise Stacy (or just Bruise for short). I am 29 years old, and I am a C# Developer working on desktop and mobile apps using Xamarin. I work in the security industry developing configuration tools for our customers and mobile apps for the end users. I was born, raised and educated in Dublin. I went to Dublin City University to study Computer Applications after a failed attempt at Arts in UCD (I lasted a whole semester before deciding it wasn’t for me)!

My company allows me to work in a small team alongside senior developers from who I can learn and grow. I had come from a start-up up company with only one other developer who’s background wasn’t actually in programming, so I knew my skills needed work and thought this was a great place to do it. The company also had an interesting road map which would, further down the line, start into mobile development which is something I did a little of in college and was interested in getting back into. 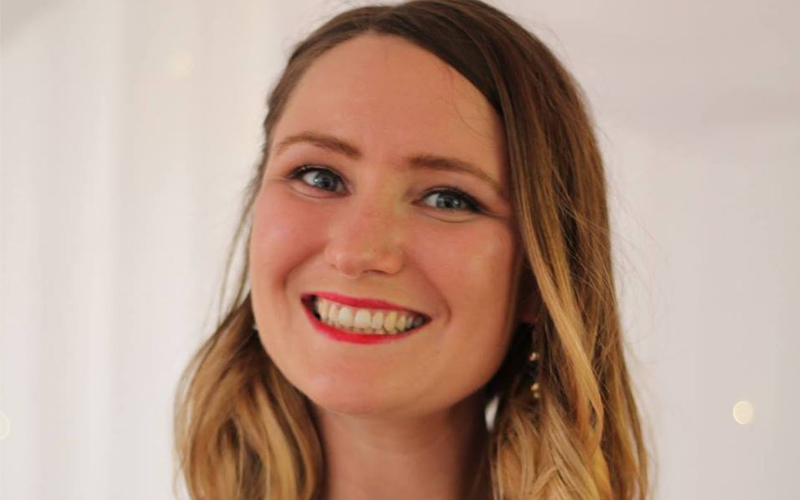 Roller derby is a full contact sport, played on roller skates (the old style ones, not in-lines). The game is predominantly played on a flat, oval track, with two teams fielding up to five players at a time (one jammer and four blockers each). The four blockers for each team form the ‘pack’. Each team’s jammer’s aim is to get through the pack and then score a point for each opponent that they lap. The blockers’ job is to make this is as difficult as possible for the opposing jammer while simultaneously trying to help their own jammer score points.

The game is broken up into a series of ‘jams’ which can last up to two minutes, each jam allowing the team to field a different set of five players, and start scoring again. Roller derby is a great combination of physicality and strategy – with both teams simultaneously playing offense and defence, there’s a lot happening at every moment.

I train with my team (on skates) for two hours, three times a week. Also, as a team, we do one hour of off-skates conditioning. On top of that, I train with a personal trainer (Simon McEvoy, King of Kings) to work on my specific conditioning goals, and then I’ll go to the gym by myself once or twice a week for weights training as well. When preparing for the World Cup, I also had Ireland training once a month for 2 days. 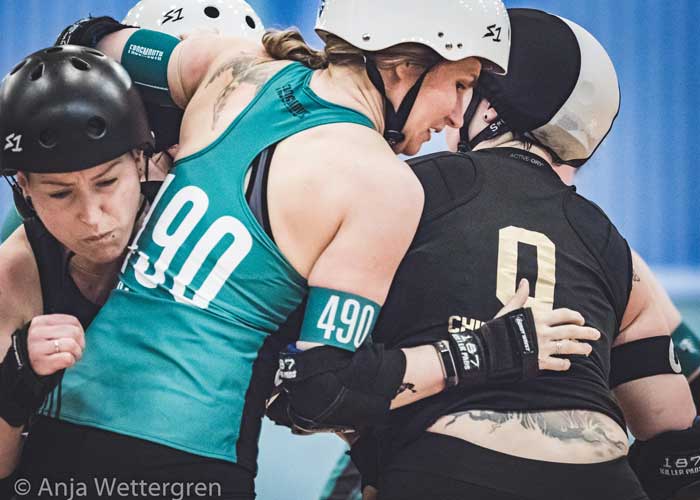 I started 7 years ago, having not skated in well over a decade (and never in quad skates). After watching the film ‘Whip It’, I really wanted to give it a go (once I discovered that it was, in fact, a real sport and not fictional). When I found out there was a team in Dublin, I signed up immediately. Luckily there was an open skate for beginners the very next day, so I didn’t have to wait long!

I played football from when I was about 8 years old until my second year in college when I stopped. When I discovered roller derby, it filled that gap. I was hooked after my first session and have been skating with Dublin Roller Derby ever since. I loved learning new skills including how to fall… repeatedly (sometimes on purpose, sometimes not!) and making new friends.

I find it to be a really important physical outlet, especially since I have such a sedentary job. It’s great getting the body moving, and working off any work/life frustration after a day’s work. Frequently I turn up to training, when I’d much rather be watching a film or reading a book, and 10 minutes into the session I feel so much better. When training with my teammates, you can’t half arse a session – otherwise you’ll spend the whole 2 hours on the floor. It requires a lot of focus so you have to leave everything at the door when you come into the hall for training – whether it was a tough day at the office or something else.

On the creative side, I’m involved in coaching throughout the different levels in the league, from absolute beginners all the way up. It’s a fun challenge to think up different ways of explaining strategies/skills and different drills to keep sessions interesting and accommodate different ranges in skill levels. 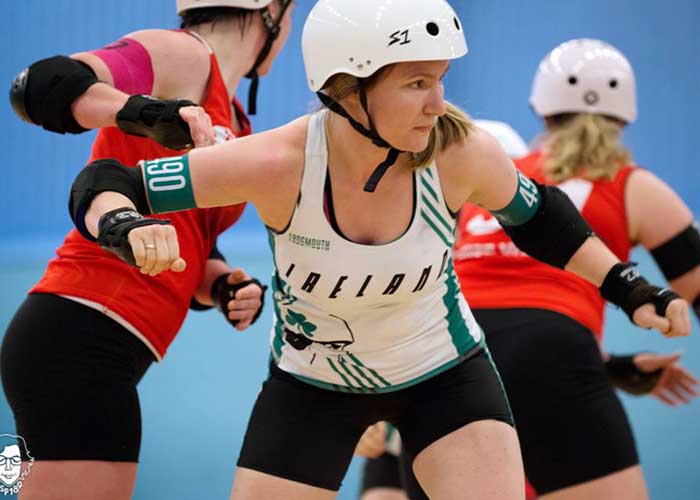 Roller derby is such a huge part of my life – I wouldn’t be able to deny that my life has changed because of it. It introduced me to a world of new people, from all walks of life; it has also made me a lot more confident, taught me a new range of skills and given me goals to work towards. I never considered myself particularly competitive before, but suddenly I had something that I was doing not just for fun, but because I wanted to get better at it and wanted my team to succeed. Sometimes it’s hard spending so much time (and money) on a hobby – you miss out on a lot of family or friends’ events because you’re travelling for competitions or you have training. I’m lucky to have surrounded myself with great people who support my hobby and come to a lot of my games or fundraisers.

Any physical exercise is going play a major role on your mental health and stress relief which can only aid in productivity and focus at work. When fleshing out strategies in derby, we need to be able to come at them from a number of different angles – how the opposition blockers will react, how their jammer will react, what if we have players in the penalty box, and so on. This kind of problem solving transfers well to programming and leads to better thought out solutions. It’s one of my favourite parts of derby! There are also the obvious skills that transfer over quite well, including teamwork, confidence in your abilities, focus, communication and willingness to learn and grow your skills.

One of my favourite things about playing derby is all the travel we get to do as a team. Our A-team has to travel outside Ireland to get the competitive games we need so we’ve played all over Europe (the UK, Germany, Finland, France, Sweden, Belgium), as well as multiple trips to the States (Florida, Pennsylvania and South Carolina). Exploring new places, jumping into the sea or lake after an intense game, and finding good food options are all fun memories.

Having already crossed ‘represent Ireland at a World Cup’ and ‘play at a Women’s Flat Track Derby Association (WFTDA) Playoff’ (Dublin made Division 2 playoffs last year) off the bucket list – the next step is making it to WFTDA Division 1 playoffs. We’ve fallen short in the world rankings for 2018, but there’s always 2019! In the meantime, Dublin Roller Derby is hoping to win the inaugural European Cup in Birmingham this October!

If you’ve never given it a go and you’re a bit nervous about it, just give it a try. One of the best things about roller derby is that it’s a sport that anyone can pick up at any age regardless of their athletic background or fitness level. We have members in their early twenties to players well into their forties; people who’ve played sports growing up and for some, roller derby is their first time playing a sport since PE. There’s also other ways of being involved in roller derby – announcing games, being a skating or non-skating official or a volunteer. It’s a great community to be a part of. 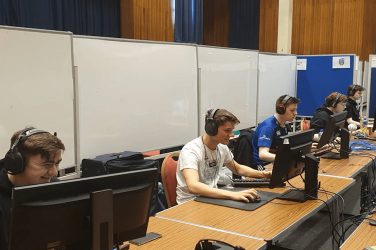 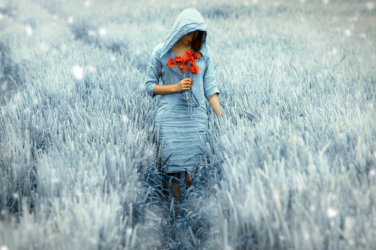